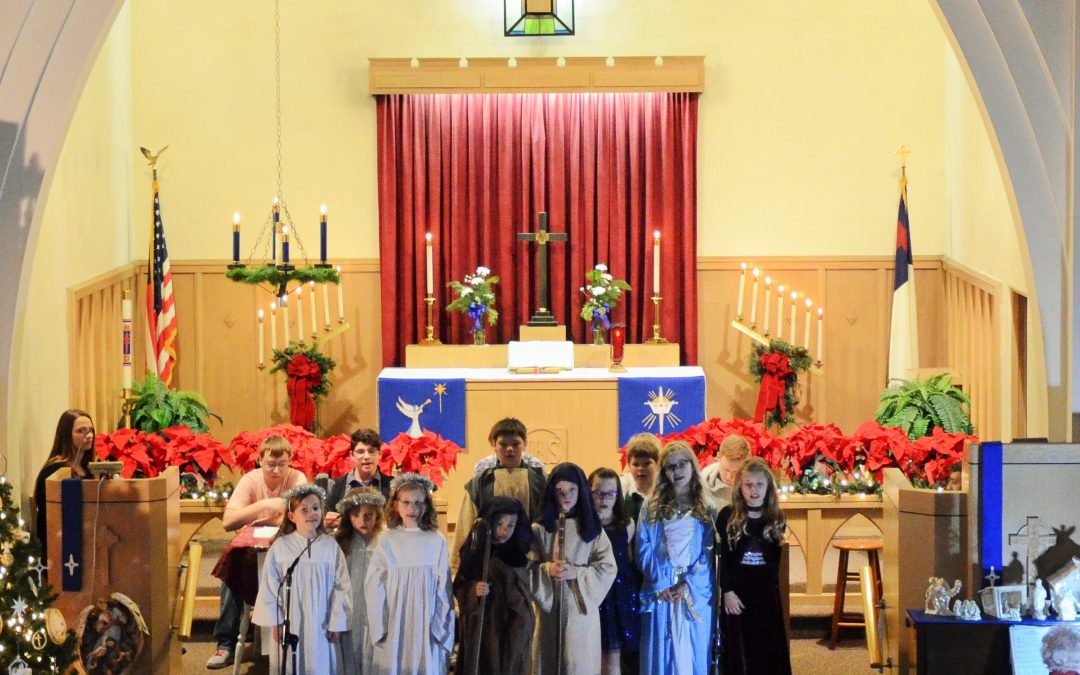 Christmas Eve at Martin Luther Church began with a prelude of Christmas Carols played by young piano students followed by the MLC Choir singing “Silent Was the Night” and “Away in the Manger”.  Pastor Ken Tubbesing welcomed all to the 5:00 p.m. service.  As the pews full of attendees sang “O Come All Ye Faithful” the Sunday School Children entered and prepared to tell the story of the birth of Jesus.

The Preschool and Kindergarten classes recited “Who is The King of Kings” and “Jesus is the Light” followed by songs of “Away in the Manger”, “See the Baby Jesus”, and “Come On, Ring Those Bells” with a solo by Ella Grotrian. 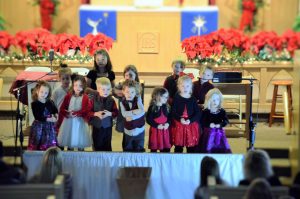 Grades 1 to 12 then presented a play entitled “The Power of the King” in which a group of performing kids get stranded during a snowstorm at a radio station and share the joyous Good News of the Christmas story to all listeners of the station.  As a result, a non-believing disc jockey discovers the real meaning of Christmas!   Students dressed up as Mary & Joseph, the innkeeper, shepherds, and angels helped to re-tell the miraculous story of that night long-ago when our Savior came to this world as a gift from God.  A host of songs by all also included solos by Delani Sharples, Reese Grotrian, Rylie Beethe, the angels-Addison Grotrian, Layla Miller and Ayla Eggers, and the radio station deejay, Zach Ottemann. 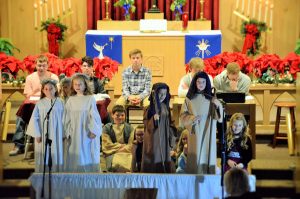 After the Sunday School program, the offering time featured a solo by Dave Findeis followed by prayers and the traditional  candlelight service where the congregation sang “Silent Night”.  The evening wrapped up with the Lord’s Prayer and singing “Joy to the World”.  Another tradition at MLC followed when brown bags filled with candy and fruit were handed out!

The program was directed by Kathie Grotrian assisted by Sunday school teachers and the Parish Education members.

For to us a child is born,
to us a son is given;
and the government shall be upon his shoulder,
and his name shall be called
Wonderful Counselor, Mighty God,
Everlasting Father, Prince of Peace.      Isaiah 9:6